If you are like us, Slushies, then you love a good duality.  We’re hooked on the way “belly-up” can mean to be a flop and to roll in closer. So, belly-up to this episode where we discuss two poems by Judith Roney– “Belly-up” and “Relictual Taxon.” After some laughs about how it’s easy to mistake our basement studio’s relative isolation as evidence of a Zombie apocalypse (and name our weapons of choice), we talk about Marion’s vertigo in her new apartment, Jason’s strategies for alternate side street parking, Samantha’s tips on how to properly pronounce Abu Dhabi, and the global proliferation of pumpkin spiced lattes. Judith Roney’s poetry reigns us in and rewards our focus. Listen in as the The Slush Pile crew has an epiphanic, intertextual jam session with “Belly-Up” and “Relictual Taxon.” We start with “Belly-Up,” which immediately had us contemplating room dividers and family tensions and an array of resonances and literary echoes. Listen for Jason’s references to Rickey Laurentiis’s poems and to Adrienne Rich’s Aunt Jennifer’s Tigers. From “Belly-up” we turn to “Relictual Taxon.” Hear why we love poems that make us smarter about our cultural predicaments. Poetry, climate change, and the anthropocene: no better way to reckon with extinction than huddled around a mic talking poetry & flipping thumbs. 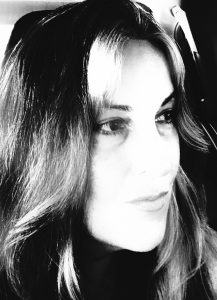 Judith Roney tends to write about dead people (a lot), relatives, the abused & murdered sent to the Dozier “School” for Boys, the forgotten and misunderstood, hauntings & ghosts. The city she grew up in, Chicago, haunts her. Brick, soot, single pane windows, frost-covered, small protection against wind howling in from Lake Michigan. Sometimes it seems everything haunts her. This is probably because she read Rebecca by Daphne Du Maurier when she was quite young, but it’s still her fav book ever. Ever.

Judith Roney is the author of According to the Gospel of Haunted Women (ELJ Publications, 2015), Bless the Wayward Boy, (Honorable Mention, Two Sylvias Press), Waiting for Rain (Finalist, Two Sylvias Press 2017), and Field Guide for A Human (Runner-Up, Gambling the Aisle 2015 Chapbook Contest). Her poems and other writing have appeared in many anthologies, most recently in the UK’s Shooter Magazine’s “City” themed anthology, as she “poetically takes the pulse of Orlando following last year’s nightclub shootings in “<80 BPM.” www.jdithroney.com 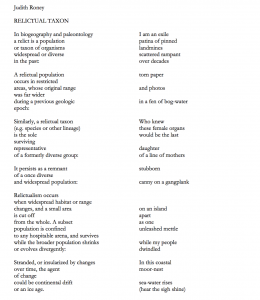