Hello Slushies. Do you see the string? Past the blooming peonies and fungus gnats? Follow us into the labyrinth of our minds as we discuss the work of Eric Stiefel. You may need to brush up on your Greek mythology and Italian literature as a guide. A discussion about various versions of ourselves turns into discussion of an app that animates photographs of faces and National Mason Jar Day (November 30th). And, maybe, the only way out of the labyrinth of the mind is to open your mouth only to forget what you were going to say.

If there was a national day to celebrate you, what would you want people to do that day?

Eric Stiefel is a poet and critic living in Athens, Ohio with his dog, Violet. He teaches at Ohio University, where he is also pursuing a PhD. His recent work has appeared or is forthcoming in Apple Valley Review, Prism Review, The Literary Review, Tupelo Quarterly, Frontier Poetry, and elsewhere. 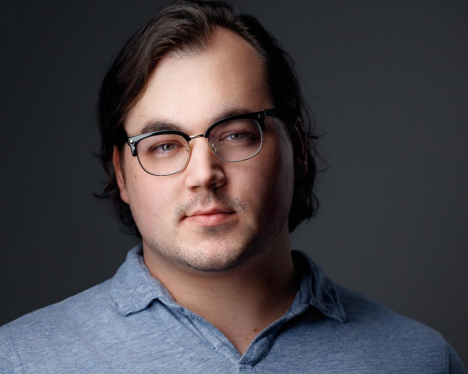 At This Point, I’d Take Anything

when West killed himself I didn’t say his name out loud for months,

he abandoned inside this house of chaos we call everyday or otherwise inscrutable, my shoulders trembling like stained glass, the same way,

I imagine, Theseus trembled as his father threw himself to the rocks, not long after he left Ariadne sleeping on a beach made of coral and grit,

the mind displaced while the body stays behind, the breath clipped short and calcified, strung up in the overgrown garden Dante held back for suicides,

while, in some version of the myth, Ariadne became a god, goddess of serpents and twine and everything tangled, winged beasts hovering on the fringe

of knowing one way or the other, gloating on the worn-out roots of the trees we’ll be burdened to, until I’m sitting on the floor in front of a coffee table

pleading first with myself and then everything else, this skeleton of history and an infinity of arrangements of the stars for an answer of some kind—

at this point, I’d take anything that masquerades as understanding like a barrel to my chest, something to cradle off into the murk and the shadows of the night.

Each time I kill one of my old selves—or more often let him loose into the static—I stumble on his shade sometime later, often when the seasons have changed and the lilacs have withered so that they, too, no longer resemble their former selves—

He was there, right there, standing in front of the meat market, with a ring of brass keys in his hand, just watching

as the pedestrians idled by—

from any real distance, or would it all just blur, terribly,

so that there could be no gesture, no omen or ominous figure lurking in the corner of one’s eye, and what

would I do then, what jar would I keep the days in, and how would I order them or else unravel further into a blizzard of ideas, and then what sense could I make of this before suddenly drifting away?

If It’s True of Human Nature

Actually, I hate the flowers—

now that the birds have vanished, as the last clouds drain away and a thin light winnows down where a grove of bees used to flourish—

and if you spoke to me of cruelty, I’d think about primrose in winter, lying dormant in the dirt, holding itself frozen, while the leaves left on the surface lose themself to rot—

I’ve been bestial and cunning, the way

ㅤㅤㅤㅤㅤㅤa troop of foxes conspires to survive the snow,

as winter moths lay havoc on landscapes of white trees—

and if you spoke softly, I might learn to trust you, even fold as a feathered wing, knowing that you might hurt me

ㅤㅤㅤㅤㅤㅤand that that hurt might be a kind of devotion

that we couldn’t explain, as the roof dulls the raindrops above us into something bearable,

ㅤㅤㅤㅤㅤㅤas if we could know

the limits of what we could bear—