It’s a rainy day in Philly, even rainier in NYC, and curiously blue in Abu Dhabi. We’re wondering whether you can OD on zinc, what’s happening on planet Saadiyat, and whether ghosts are real.  These poems are full of curious imagery, versatile movements and occasional hot-pants and sneeze-ghosts. We loved journeying through each one, which took us, “artfully all over the place.” We learned about Caroline Knox’s poems, cellist Miroslav Rastropovich’s work, and Culpeper’s Herbal. Thank you, James Grinwis!

This episode is brought to you by our sponsor Wilbur Records, who kindly introduced us to the artist is A.M. Mills whose song “Spaghetti with Loretta” now opens our show. 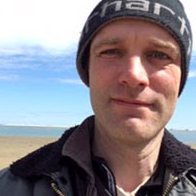 James Grinwis is the author of two books of poetry, The City From Nome (National Poetry Review Press) and Exhibit of Forking Paths (Coffee House/ National Poetry Series), both of which appeared in 2011. His poems have been relatively quiet since then, though recently have made appearances, or soon will, in journals including Hotel Amerika, Bennington Review, Poetry Northwest, Rogue Agent, and Willow Springs. He lives in Greenfield, MA.

–Our brains are made of marbles, and a game
is always going on inside our skulls.

Miroslav Rastropovich
is eating an ice cream cone
by the steps of the Janiculum. It is February

but he’s quite warm in his bearskin.
This after absorbing the exhibition
on the beach of shredded chum.

A bull stands near a rickety fence, the hook through his nostril
like a small bit of stick
dangling from the claw of the back hoe

like the way a habit
grows chronic, natural, enzymatic.

Advil Media was targeting the 20 something crowd all season
and 20 somethings were scattered throughout the forums and avenues
as if the world consisted only of 20 somethings,

the occasional senior citizen slowly wending through them
like a glimmering fish that had swallowed a gem.

The construction of the cello building:
anointed, be as like the planks of 17th century ships.

It is all very 17th century.

A chord that strikes again and again
soaks the nerve in murk.

A barn in a dark field surrounded by a few girls.

A sheaf of old love notes
inside a Hyundai pries itself open, oops.

It can go like that, or it can remain, get bored, naked.

After the marathon there is beer week, and then there
is hurt week, beyond that a lost dog
digging a burrow under the old shed to escape the

It has happened to a friend of mine
but a woman in sexy hot pants
has never come over to me and said
‘I want you to date me’.

It used to be it was always snowing but not anymore,
it may hardly be snowing at all.

PHOTOGRAPHY, OR WRITING WITH SUNLIGHT

The dinner: subtle.
The conversation: witty, a few stranded grains.
I sat on the outskirts of the table, wayward-like,
un-intimately tied to the events being created.
Sal was sculpting her future with contemplation. Like one painting
fused to another painting. The park bench
she placed in an autumn pool, the architecture in a suit of summer variety.
Paul had hewn a moment to come like a bibliophile
rearranging a shelf, an analyst seizing a book as a problem to be solved,
a track champion smoking behind the gym.
Setting the Toyota Corolla in a duration of calm
before it had time to crash into the cluster of small farm animals:
Miranda and her sweetness had scrubbed
the cafeteria of quiet clocks into a cushion of warmth
before releasing the people and emptying the clouds of their snow.
Culpeper’s Herbal jutted from the table like a frozen chunk.
Take ‘talon,’ ‘Oslo,” and ‘pea’
and do something with them, she said.