It’s a brusque ending, slushies, brusque. (Stay on til the end and give a listen to “At Pegasus” by Terrance Hayes at the end of the episode). 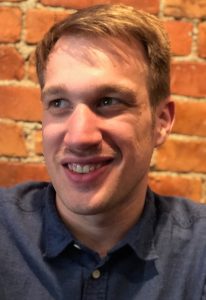 Blake Campbell grew up in a farmhouse in Pennsylvania and now lives near the sea in Salem, Massachusetts, where he works as an editor by day and a tour guide by night. He likes dogs and can tell a hummingbird from a hawk moth. His poems have appeared in, The Lyric, The Road Not Taken, and Hawk & Whippoorwill, among other publications, and his chapbook Across the Creek is forthcoming from Pen & Anvil Press.

In this season of rainbows,
at my usual perch
over the pool table, I leer
at the lovely young—the bears and the bros
in their jerseys and baseball caps,