Listen in as pop culture, nostalgia, and formal craft converge in a discussion of poems by Jeff Royce. As of this recording “we are not the epicenter,” but it feels as if we have all the time in the world as the pandemic spirals on just outside the sound of our voices. Royce has us remembering The Monkeys and Lava Lamps, recalling Larkin’s famous insight that “They F&^% you up, your mum and dad,” and imagining angel trumpets and panthers (both Rilke’s famous panther poem and Teju Cole “On The Blackness of the Panther”). It’s all about resonances and craft, slushies. (Or resonances and interventions:  Dear Queer Eye crew, Kathleen needs a home-office resurrection!). If you are looking for more fabulousness, Kathleen recommends two podcasts, Jonathan Van Ness’ “Getting Curious” and Sam Sanders’ “It’s Been a Minute.” Samantha suggests the film Now and Then. Jason is loving Andrea Lawlor’s Paul Takes the Form of a Mortal Girl.

This episode is brought to you by one of our sponsors, Wilbur Records, who kindly introduced us to the artist A.M. Mills. The song “Spaghetti with Loretta” opens our show.

Jeff Royce lives and teaches in South Florida. He is elaborately married with two refreshingly complicated daughters, though he is less enthusiastic about the two dogs and fat lizard who also live with him.  Jeff was social distancing before it was cool. 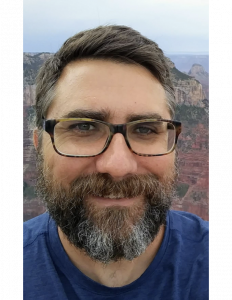 WATCHING A PANTHER
AT THE PALM BEACH ZOO

Her chirps and caterwauling are
the echoes of an empty sanctuary.
She lowers her stare, pulls back
the fat of her mouth, but the growl

rumbles in from another pen.
Thunderheads build on backs
of roseate spoonbills, restless
in the next enclosure.

Their pink shadows and the stink
of flamingo shit are enough to remind me
my heart is a muscle.

Near the reptile house, wooden manatees
drift on an ocean of organs.
The music is coming from somewhere else.

Man hands on misery to man.
It deepens like a coastal shelf.
–Phillip Larkin

It began with horseradish in her mashed potatoes,
her father slipping it in before dinner.
(It began much earlier I suppose.

But this is my mother we’re talking about, younger and thinner
and unaware that fathers can be cruel.)
She dove in without sniffing, and since that day something within her

grew guarded and deep. They met in high school–
my father and she, I mean. She let him kiss her breasts
only through her shirt, so he imagined each one a jewel.

Think of the let down when he saw them undressed,
not cut as he’d expected them to be,
not flawless as the ones he had caressed

under her blouse. He learned to live with them, though; he
learned how not to ask for very much,
to ignore her responsibly.

Her body arched, in dark, under his touch.
They fumbled dutifully until it hurt.
My brother soon was born, a crutch

to hold my mother up. But he wouldn’t wear a skirt.
She cried until her shoes were damp,
and my father taught him how to play in dirt.

Let’s try again, she begged–words pressing like a stamp
on my brother’s soft head–and I, too,
was pushed into this world like a rudderless tramp.

I’ll never know for sure if this is true.

I have this 1960’s sitcom desire
to frolic on the back lawn.
Our shirts will be fashioned after white sides
of ranch style houses.
Our hearts will take shapes
of plastic Adirondack chairs.
The kids can blow bubbles that’ll satellite the shed
like little acrylic space shuttles.
In the linen-scented afternoon, the backward-stumbling sunlight
will brighten angel trumpets,
drooping polished shuttlecocks
swinging like clean sheets in the here-&-there breeze.
& I’ll pick one for you, & you’ll remark
that the day has smelled just like a fresh haircut,
then you’ll kiss my cheek with the same precision
with which you clip coupons
& the girls, giddy from so much Frisbee,
will roll their eyes & mock our tenderness,
& we’ll chase them & they will feign terror
& scream like they mean it,
& we’ll prolong their terror by pretending to just miss them,
but eventually we’ll tackle them & splash onto the lawn
which has always been just weeds.
We’ll lie there breathing for a while, the four of us,
our heads forming a circle in a way
I imagine might have made an excellent cover for a Monkeys album,
before one of us, probably me, will spot the vultures circling,
not menacingly, but in a shiftless, existential sort of way,
drifting on lava-lamp currents, & I’ll note
how they resemble jets, not in shape
but in the way how we feel about them flies out in front of our voices.
& then someone, probably you, will say,
We are, after all, sitting in weeds, & I’ll say,
What? & the girls will squeal & scramble to the badly cracked patio
where they’ll pick beggar ticks from one another’s backs,
& by now it’s dusk dark
& a fat tarantula moon is crawling up over purplish clouds.
Then, Shit, what’ll we do about dinner?
&, Papa, I still have homework to finish!
& Goddamnit, why are you crying? Stop crying!
& you tell me we don’t even have an angel trumpet tree,
& your breath smells like sparklers,
& the sparklers, in the black air, are scrawling something
that vanishes before I can get it.
I don’t get it, I say, & you say,
You never get it, & I say,
Just go to bed, you can do it in the morning.
& I put a movie on so we can all sleep
& we eat popcorn & freezer pops for dinner, & I tell the kids,
That’s life, & they’re like,
Great!