This episode is all about craft and connections:  literary craft and professional connections. In the notoriously small world of poetry and creative writing, should editors recuse themselves from making editorial decisions? Things get wonderfully complicated when you know a poet— be it from grad school, from a workshop, from a conference. Or from dressing up in potentially crass Halloween costumes. (Listen for further confirmation that Jason and Kathy are soul mates via their 90s -era matching Princess Diana getups, complete with steering wheel as accessory and pals playing paparazzi). In addition to the nuances of professional ethics in poetry land, we talk sonnets and the divided self as we discuss 2 poems by Charlie Clark. Clark’s archive of references ranges widely—from Death Grips to inept gladiators to the power of grammar and etymology to charm readers. At one point we’re making rock n’ roll hand gestures to indicate his poem’s caesuras; at another we’re mesmerized by the way Clark works within the confines of  14 lines right under our noses. If you like what you hear, Clark’s new book of poetry The Newest Employee of the Museum of Ruin will be published by Four Way Books later this year.

This episode is brought to you by one of our sponsors, Wilbur Records, who kindly introduced us to the artist is A.M. Mills whose song “Spaghetti with Loretta” now opens our show.

Charlie Clark studied poetry at the University of Maryland. His work has appeared in New England Review, Ploughshares, Threepenny Review, and other journals. A 2019 NEA fellow, he is the author of The Newest Employee of the Museum of Ruin (Four Way Books, 2020). He lives in Austin, TX. 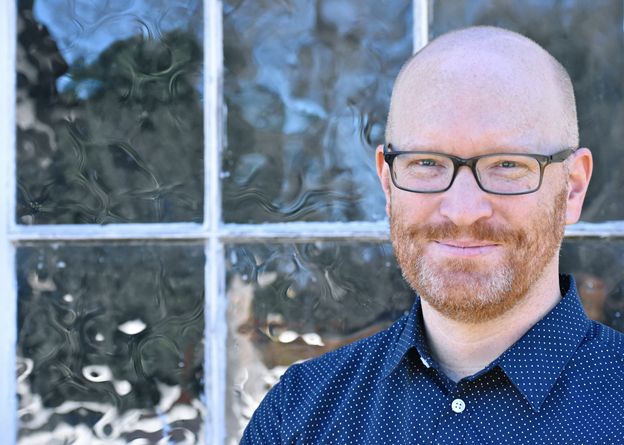 The Beast I Worship

I light my torch and burn it.
I am the beast I worship.
—Death Grips, “Beware”

The beast I worship doesn’t blame

the tree for its lithe, expanding

glamour, yet beneath a sky full of blue

kingfishers crying tears from the tree

the placard with its Latin name

laid out in a lush calligraphy

and as many as he can reach

of the narrow green articulations of spring

starting to feel their way into the air;

before he finally takes leave completely,

the beast I worship climbs in and sets the whole thing

burning down. The beast I worship

Address To That Inept Gladiator Timorous

1. Supposing the Futility of Language as a Means of Protecting Oneself from Harm

Your armor amounts to the skin of some very large dead beasts,

yet you retain such glamour. If you don’t know the word,

that’s because the Scots hadn’t yet invented it. There wasn’t enough

enchanting mist strewn on even a rainy Roman summer morn

to veil the parts your opponent hoped to hack from you. Had there been,

had a cloud become the air around you, had you survived and done it in this way,

had the poets seen this and gone crazy, probably you still would have been

stuffed back into your cage, fed no more gruel than usual by the mulch-

for all the people eager to see some new brute cut your meek gray swarm in two.

Pardon, please, these aimless suppositions. Did you know glamour

is only a corruption of grammar ? This proves nothing but the impossibility

of any word’s use to the dead. No word will build a door out of air

and let you step safely through it before it grammars shut.

2. Concerning the Awfulness of Audiences Across Time

Should you somehow fast-forward through millennia, it would likely be

the sons of paper-product scions laughing at your harm. They will be no less noxious

than whoever watches you now. before I waste our time trying to explain the value

of flowered vines embroidered on what people wipe up grape-juice spills and urine with,

let me just call them rags. It is a sound so plain I hope it makes sense no matter what

the tongue or age. It’s rags the audience throws at you, not that they want to offer salves

or congratulations; they simply want to throw things at you and rags are the cheapest thing

on hand. Were I to acknowledge that the word audience existed in your tongue,

what would that matter, except for how it meant something more like listening then,

which means irony existed then too, as some hack-eared opponent hollowed out your mouth

and to slow the bleeding you filled it with the audience’s rags, the loosened red thread-ends

of some drifting in the wind from your mouth toward the lords drunk at center court,

3. Cataloging Some of what Awaits Him After the Morning’s Dogs Are Done

Heaven is an archive full of friends

whose legs have been restored. You can walk

with them through the ever-longing haze and regather

the other parts both they and you had scattered,

heads and brains and arms and tongues and eyes,

the eyes most especially, because there is so much

now that you are out of the arena’s daily dust and blight,

out of the darkness of its catacombs; there is so much now

for you to gaze at, it is worth acknowledging

the Norseman who would, drunk at sea some mist-

decked century hence, invent the verb to gaze as a variant

of to gape, what does not describe a wound exactly

but does suggest a body breached as well as it does awe,

which in this heaven’s tongue is infinite.