Dear Slushies, have you ever heard a theremin? Visited Utah? Tried a baked Alaska? Join us for an episode dedicated to poems by Natasha Sajé, whose work explores belonging, queerness, & womanhood in a flow of humor, insight, and vivid images. In “Dear Utah,” Sajé takes us on a trip through her connection with her now-familiar state, which she “complained about for one-third of [her] life”. “Is Homosexuality Contagious?” directly addresses the reader as it contemplates homosexuality, politics, and the way other people’s Baked Alaska commands our attention. Finally, “Dear Caitlyn Jenner” stops the show. Listen in as the editors collectively lose it.  It’s goosebumps and tears in an episode in which the editors wear matching tunics and Jason’s thumbs cry. If you can’t wait to get right into the poems, you can skip to the 4-minute mark.

This episode is brought to you by our sponsor Wilbur Records, who kindly introduced us to the artist is A.M. Mills whose song “Spaghetti with Loretta” now opens our show. 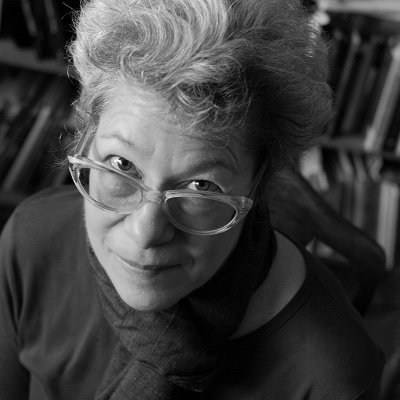 Natasha Sajé was born in Munich, Germany, the only child of two parents displaced by the events of WWII. She learned English from Romper Room and in kindergarten in the suburbs of New York City. She loves to cook and eat as much as she loves to write and read. She is the author of three books of poems, including, most recently, Vivarium; a poetry handbook, Windows and Doors: A Poet Reads Literary Theory; and a memoir in essays (Terroir: Life in Place) forthcoming from Trinity UP in Fall 2020. She teaches at Westminster College in Salt Lake City and in the Vermont College of Fine Arts MFA in Writing Program.

State in which I have lived longer
than any other, state of my discontent.
Horace said skies change,
souls don’t, although like most,
I blame anything but myself.
You are the place where I moved for work
and the place I’ve complained about
for one-third of my life,
the locus I’m trapped in—
an aging otter in an arid zoo.
You are my theremin—vibrations
and tremors I feel without touch.
Sometimes a fly-over sense
of being left alone, even though
the bank teller calls me by my first name.
We Utahns wear jeans to the symphony
and use family as an excuse
for not showing up. We drive streets wider
than highways while the “blessed”
call the shots, where one in five
carry a gun. I roll my eyes at special
rings and garments that mark
me as having no ward. You are the state
I must explain: watery beer
or restaurants close to schools
without liquor. You are also the state
where I’m never lost: your over-the-top
mountains breathlessly close—
craggy grey rock brown-hilled in summer,
whiter than my teeth in winter, green in May
before drought—always tell me where and when
I am. Along with the copper mine one can
see from space, the salt lake too shallow
to swim, the townhouses jammed
into crevices of valley like trilobites
procreating frantically in a tidepool,
while humans are edged by wilderness
where elk, coyotes, moose, and mountain lions—
and no mosquitos! no mold!—roam.
O Utah, you’re a kinky rectangle and I’m a pear
wasted on a December tree.
We’re both queer as cupcakes except you
pretend you’re white bread.

Like where you touch a door knob and then wipe your eye and two days later you have a scratchy throat? Or a restaurant patron

seeing Baked Alaska at another table flaunt its frosted heat, tender cake under cold fruity creaminess and fluffy mountains of meringue. You’ve heard of it.

You’re born that way. Either liking women or men or both and in-between. Or neither. Or not knowing or at least not knowing yet. Or wanting to know. Or not.

Watch the person move their spoon into the mound.

The Romans. Look what happened to them.

Hear a faint smack of lips.

Their daughter wrote a story about a rabbit based on Marlon Brando.

If we’re talking animals, recall the two male penguins who raised an orphan chick. Or
the half female-half male cardinal. You could see the split.

Augustine who thought he could live without a body and wanted everyone else
to do the same.

Yada, yada, yada. Which means “knew” in Hebrew. Or to show mercy.

Each of us has things we must turn away from. Look

Why were you in the restaurant in the first place. Because you weren’t really hungry,
were you?

You say, there’s more to being
a woman than hair and makeup.
What: swaying walk, tender heart?
My wife likes polish now and then—
a woman who’s never worn pink
or a push up bra. In the pool,
scarlet toes make me look twice,
the color glints like blood. I look
and look again, as when I eye your shift
from Bruce to Cait—your lifelong dream lived late—

I will be able to live authentically
as female, but I’ve missed so much.
Authentic: from one’s own authority.
It’s quite a dream to have a body that
does not get in the way of who we are.
I cleaned the whole closet out—the boys’ stuff
is gone. You wear your heart, let arrows
pierce it. My method’s blending in.
No gazing in the glass, and as I age,
I’m ever more invisible. Still,

it’s a different thing to take down
womanhood instead of build it
from scratch, a line drawn in the dirt
on which the fairness of the race depends.
I’d like to start anew. I’m a crumbling
bridge between who I am and what I like.
Here, take my skirts and tights,
the teal, the olive, and lavender;
take the scarves; my pillows and my lumps,
batter that rises up and over

the tin. Really, I wouldn’t mind losing the breasts,
their squish, their sag and flop—
but what would balance skillet-wide hips
and buttocks round as cabbages?
I’d shrink those too. I’d choose a boy’s
narrow pelvis, flat chest, muscled.
Yours, before, come to think of it.
Note we both said “boy,” youth and power
in every move. I don’t have to justify.
When every body’s a field of claim,

differences aren’t small. I know the itch
to float, to choose my sex and who I love
as I choose clothes, each day a palette
or a lump of clay. You want to be yourself,
get dressed, get ready to go out, and just
be like a normal person. I take for granted
what you’ve never had. Fairness depends on
where we start. I’ll see you at the finish line.