On today’s episode, we realized that the sound studio needs some naked art! We never thought about it before, but after the Abu Dhabi team and Jason “showed off” about the art in their offices, we got jealous. Joe said we could BYOA, so we’re gonna. Stay tuned.

This got us right off on a tangent about Icarus, a sad one, as he apparently is outside of BMCC, warning students “not to aim too high.” We had our first vote of the day and it was a loud and long “Booooooooo” re: the sheer meanness of its message.

We started with “Shops Like That” which immediately began a conversation on sense and syntax. Which lead us to a conversation of the image system of the poem, the descriptive scene, and whether this poem would have appeared in Fence in the 90’s (ask Jason). KVM didn’t tell anyone, but she loves the poem for its Wooly Bully reference.

We spent at least 15 minutes dissecting the piece, only to have our vote—end in a tie!!!!

We moved on to “Travel Light.” We were smitten by its sprawl and humor, maybe especially the couch catapult (you’ll love that image too). The poem is so dense, KVM thinks there could be chapters and chapters. And the tangent we went on with THIS poem’s was—toilets! (Listen—it will all make sense.)

The next poem we discussed was “Planet’s Climate Reversal.” Spoiler alert: iguanas abound. You’re about to learn a lot about iguanas and to see an image that you might not be able to shake. You’ve been warned.

This poem doesn’t only have iguanas, now, it also has state mottos and led us on one of our two-hour journeys through the swamp lands, filled with rehab scams and Disney World factoids.

The poem gave us the chance to recommend Dumb People Town, the podcast where Joe Zang learned that all crimes committed in Florida must be publicly reported.

Stay tuned when the show sounds like it’s over to hear the crew respond to Addison’s silky smooth voice. And more after-the-show news: The poem that ended in a tie was ultimately rejected. Check everything out in Issue #100 of PBQ! 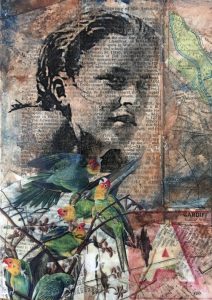 Alicia Askenase’s poetry jaywalks across the streets of American poetry casting a gimlet eye at every word she encounters. Undaunted, she juxtaposes her greatest joys and disenchantments through sonorous and rhythmic landscapes of unexpected insistence. She confronts the world we live in with daggers and oyster forks, swallows it and returns it to the reader in covert scores. For her, language is primary. Meaning evolves organically from the stolen seeds she sows.

It’s raining iguanas
In the In God We Trust state, plopping
From trees, not dead, playing dead, when temperature
Falls below 50, sluggish, under 40, blood stops moving.
Whatever you do, don’t touch them!
They have a good chance if you push them into the sun.
Somebody will prod one with his pool skimmer
So allegedly you have to touch them.
They thaw out, like chicken on a counter or frozen water
Delivery bottle left outside you can blow out like hair.
By no means should you collect them in your car!
When they warm up, they’ll crawl all over you
and you’ll probably freak out and crash.
Like the Floridians, the iguana is not a native of Florida.
Introduced to the florid fountain of youth as pets no longer
Welcomed by the residents who hosted them as pets,
Florida, like many states attracts strange people;
Paradise entices the fraught with the lucrative.
Same day it rained iguanas, atop Mt. Washington
in our Live Free or Die state, the temperature plunged
with the wind chill 100 degrees below

Zero under a biting 100 degrees the winded
State of Live Free or Die degrees of our declining
Day shift iguanas reigned above Mt. Washington’s
High and lucrative paradise, hallucinated how the fraught
Entices a florid imagination of weird attractive backdrops
Where pets welcomed as residents are wonderful hosts
Are no longer pests, lounge in hot springs presented as youth
Not natives, Florida is a reptilian iguana
So don’t lose control and crash your car.
They’ll warm up to you and crawl up on your lap
Ignore the By no means should you let them in your car!
A mere symbol of stolen spring water from California distributed frozen
As precious chicken in certain markets, mellow out at the counter
Where you’ll allegedly touch discounts with a swipe
Go home and have the pool boy prod you, skimming
Into the sunny part together, it’s only good luck
And whatever you do, do touch him!
Until it drops below 40 or 50, you’ll feel bushed,
Play dead, he’ll bolt soon you’ll be landing In a God
We Trust state late fall iguanas treading upscale palms.

Up there with bad betrayals, which are all bad,
the worst to the self, I left mine with the elegant hotel
concierge in Dubrovnik I had no trouble warming up to,
except the lobby was somewhere in the middle of the place,
so you never knew until you had passed through it.

I left the unorthodox sandals I wore to your wedding,
such a terrible infraction! Oy Gevalt! A Shande!
as the bridal hairpins and cocktail fell from my hands
(se me cayeran) in the Ladies’ where I rubbed
my weak ankle and heel all part of the bum leg
I left behind by the toilet with the pull-down chain.

On the last day in Vienna I dodged my character assassin
on the same cobblestone you tripped over, occasioning
a visit to a clinic specifically dedicated to fractures,
within the humane socialized medicine of Austria! Such luck!

Though regretful for you, was it the middle finger?
You were never the same after Vienna. In Prague,
the expert, yet large cast made you drop the monocle
we’d purchased on the bench beside the statue of Kafka
where we had sausages across the plaza.

At night I remembered I’d forgotten the photos I bought
on the street in Croatia, of the flowers strangers left
on makeshift altars to virginal icons in abandoned foyers during the war.
They have the entire coast after all, no wonder they fought!
We fought over the kitsch purple-striped carpet at the hotel
in Split as I wanted to return to the understated Dubrovnik
hotel of the enigmatic lobby, where we slept for twelve hours.

Once, I left you on the Connecticut coast and returned to Barcelona,
for the seafood. You begged me to stay but my sister’s adopted
in-laws kept gaining and when they collectively sat
on the couch they catapulted me from the other end
directly into the airport, where I left my androgynous haircut in a mirror.

They shook me down in security, and Duye, that’s Peter in Croatian,
also, my brother’s name, whose facts remain in the autopsy his mother
refused to open. Duye explained to the officers up my ass
that I’d been essentially reared an orphan, and freed me.
I left his mother, who may have been mine, the crib I slept in
till five by her stone slab. Didn’t I care that she’d passed?
I cried one drop, which I left on my cheek in wax
like a Spanish statue of the Virgin of whatever town you visit.

I forgot the Via Spiga suede high heels at my aunt’s wake,
the most beautifully expensive shoes I ever fetishized.
They felt like silk on my remaining foot, though eventually
they would pinch and felt I didn’t deserve them,
so, like a fool I handed them down
to my spiteful cousins who betrayed me every chance they could.

Somehow or other I did not lose empathy, and tucked it
into the casket’s innermost satin cushioning, and peeked
at Duye’s pale lips for the last time. I recalled he died in a foreign
language, and during the twelve-hour sleep he was driving
us in a black Mercedes along the Aegean. I tossed a golem
statuette into the bobbing sunlit limestone lapping waves.

Red fruit of tropical magnolia hang, guy in long hair,
leaves trail of weed smell, faint barking.
Next season I’ll plant milkweed for the monarchs.
Did you say pull the wool? No, I said Wooly Bully.
The nasturtium flowers finally bloom from the cool air.

An evergreen couple, attractive, especially
the young man, make out goodbyes at campus café.
How does he know to hold her face like that,
pulling it toward his mouth,
the moon cannot be stolen.

Yellow berries of the female ilex, which has grown taller,
are fuller than the male’s orange, so they appear to be one shrub.
Cut a few before the birds and chipmunks forage.

Place them in the vase filled with paper flowers from that shop long ago.
There must be others. Shops like that,
humanity in the umbrella stand.
Shops with flowers like that.