Let’s start by celebrating our democratic editorial policy by seeing which of the many titles we came up we should use! “Bag O’Wigs,” “Just the Tip,” or “I Find it Aching (Oh, Yeah)”?

This week’s podcast consisted of three of our “well-hydrated” original members, the OGs, Kathleen, Marion and Jason, along with the co-op, Britt. At the center of our table were poems by Sarah Browning, who allowed us to dissect her poems like a turkey (see below) on Thanksgiving.

The first poem up for discussion was “For the turkey buzzards,” which Marion described as “ghasty but beautiful” (both the buzzards themselves and the images in the poem). We’ve provided you with an image so will understand why Britt would never want to be reincarnated into one. This poem possessed metaphors that had our crew members meeting at a crossroads. Be sure to listen in to find out our destination (aha-see what I did there?).

We skipped the main course and jumped right to desert as we discussed the poem “Desire.” Let’s just say Kathleen was a little too excited to volunteer to read this one! This brought back childhood memories for Britt, as it reminded her of evocative songs like Candy Shop by 50 Cent and Ego by Beyoncé. It even had us playing the roles of relationship counselors as we tried to get into the head of the woman going through such terrible heartbreak.

Lastly, we deliberated “After I Knew,” a soap-opera-like piece that will certainly get you in the feels, if you were not in it already.

Just when we thought things could not get anymore steamier, Kathleen brought up a dream by Bryan Dickey’s (a family friend of PBQ) partner, but that is one you must listen in to learn more about. We are so excited for you guys to tell us your interpretations of this scandalous dream. Furthermore, should this dream be turned into a poem or has enough been said?

Is purse slang for the vagine? Could Marion’s cat sitter be no ordinary cat sitter, but…a spy?

We are SO SAD we have bruises from beating our breasts, but “Desire” was snapped up by Gargoyle before we got to Sarah!!! We’ll put the hyperlink here when it goes up, but until then, check Gargolye out anyway.

We are SO HAPPY that Sarah agreed to our edit of “Turkey Buzzards” that the neighbors complained about our dancing (to “Candy Shop” and “Ego,” of course.

Until next time, Slushies! 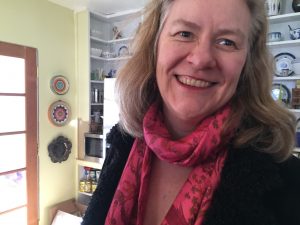 Sarah Browning stepped down as Executive Director of Split This Rock in January 2019, after co-founding and running the poetry and social justice organization for 11 years. She misses the community but not the grant reports… Since then she’s been vagabonding about the country, drinking IPAs in Oregon, sparkling white wine in California, and bourbon in Georgia. She’s also been privileged to write at three residencies, Mesa Refuge, the Lillian E. Smith Center (where she won the Writer-in-Service Award), and Yaddo. She is the author of Killing Summer (Sibling Rivalry Press, 2017) and Whiskey in the Garden of Eden (The Word Works, 2007) and has been guest editor or co-editor of Beltway Poetry Quarterly, The Delaware Poetry Review, and three issues of POETRY. This fall she begins the MFA program in poetry and creative non-fiction at Rutgers Camden.

For the turkey buzzards

who rise ungainly from the fields,
________red heads almost unbearable

to regard, crooked and gelatinous,
________how they circle their obsession

on the scent of the winds, always
________circling back, returning to settle

on that one dead thing that satisfies,
________the past to be pecked and pondered –

forsaken fare for others, but for
________the scavenger the favored meal –

to nourish us, beg forgiveness
________as we circle and swoop, descend,

fold our wings, bend to the maggoty flesh,
________gorge on the spoiled, glistening feast

I took your large hand and raised it.
Just this, I said, the tip of a finger or two –

just to the nail or so – into my mouth, which
had dreamed of just that. You made a sound

mouth and take your two large fingers all
the way inside my throat, the size of them

filling me. But I stopped, in shame and desire –
I blush writing – because you said we would

say goodbye inside my rental car outside
your hotel: Even now, days later, miles apart,

I am hungry for such thick and full.

I drove alone through the farmland
of central New York – the open vistas
and steep drops – towns with names
like Lyle unexplored, their secrets hoarded,
as I was hoarding my own secret
then. I-88 was empty as always and I
followed its long high valley, driving
away from you. We had not yelled
or broken mere things. I did not cry.
I drove fast, but not recklessly.

I stopped for a nap before Albany,
a middle-aged woman sleeping alone
in an aging Geo Prism. For a few more
miles I hoped I could just drive away.