Hello Slushies, new and old. Welcome to another episode of the Slushpile! On this week’s podcast, we will be discussing poems by Yumi Dineen Shiroma.

First up is a MEGApoem and no, we are not overexaggerating. However, here at the Painted Bride Quarterly, we always go big or go home, so Kathleen took two deep breaths and jumped right into reading the first poem, “Welcome to Connecticut.” Immediately, we were quick to realize that even though it would be a difficult one to read for a podcast, it was oh so worth it.

Samantha compared this to the work of Tommy Orange and his book, “There, There.”

This is a piece that took us into the mind of Yumi and its rhythm was “like a flood.” The crew felt as if the inner-dialogue brought them into a world of its own with memories so grand, you just want to stay in that moment, or literally-speaking, re-read certain lines to relive it.

This poem brought a lot of suppressed memories for our Tim Fitts. One of which was a terrifying flashback of a woman driving with a dog on her lap, while texting. The least she could have done was pick one reckless decision at a time, or better yet, just drive like a normal person? Just a suggestion if that lady ever reads this!

All in all, this fun and humorous piece awakened a wide range of emotions in the gang, and even had Kathleen’s thumbs up from the moment she read the title. Listen in, to find out the direction of everyone else’s opposable thumbs.

The next poem titled “A Surfeit of Saturation and Light / Hungry Ghost,” smartly used nouns as verbs and vice versa. Our own music genius, Tim Fitts, also said that this poem had a perfect pitch, so who are we to argue with that!

Yumi’s second piece was consensually described as “weird without being goofy” and “smart without being pretentious.” Now that would make a million-dollar t-shirt!

It seems both poems dived into the subconscious of the gang because Marion was reminded of the time she was possessed by demon in Singapore. Now, that’s a story only Marion can tell you herself.

Random yes, but after listening to this podcast, do you agree with Tim Fitts that people are going to start smoking again when the zombies come? In addition, how do they pronounce “water” where you live? 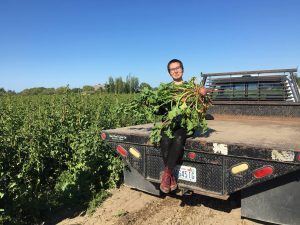 Yumi Dineen Shiroma is a PhD student in English at Rutgers University, where she studies the theory and history of the novel. Her poetry has previously appeared in BOMB, Hyperallergic, Peach Mag, and Nat. Brut, and her chaplet, A Novel Depicting “The” “Asian” “American” “Experience,”was recently published by Belladonna*. You can find her on Twitter at @ydshiroma.

Welcome to Connecticut, Land of Death and Rebirth

11:45 a.m. to 1:00 p.m. do yoga stare at trees, location:
trees. I grew so much this year your year gray
hairs an evening fishing for eels in the creek
a season overlays space the meeting of homogeneous
empty and messianic times where time informs our time
spent among any given spatial totality and you walk
by the window and

#thinking about #revenge again she shreds
the straw with my teeth the buttons done up
to the neck like you used to do again
the hand on my head the head-
stubble (oedipal, stacy suggests)

You fucking moron don’t you know I’m in love, walking you
back and forth my fingers staining the window blocking the natural light
this high noon I still cough at the smoke and the smoke still smells
like you in my lungs bent over your total knowledge project
(sign on the door a girl in a dress reading OMEN)

I love you as a tea-kettle whistles at the heat
as a window won’t lock when the dust weeps in
she allows the pipes to freeze and burst, changes
the locks and you aren’t coming back
recognizing neither my face nor my name
I take the train

I once told you about my people they were
prophets all, burned in the brain the prophet
who buries herself in new haven will rise from the earth
in 17 years reborn reborn in the mouth of 2013

A Surfeit of Saturation and Light / Hungry Ghost

The foxes hold their wedding at the base of the mountain
They wait for the rainbows to banner the sky
For the rain to fall while the sun shines
Their normative ideas about the future keep them yoked
cccccccto such couplings
No matter what dreams they might have held for themselves
Dressed in your finest you buy them two voles off their registry
I catch the bouquet of narcissus, willow and peony
You walk through a field in black and white
cccccccand you walk through another field in green
cccccccand one in gold

I love you a 29-year-old sprung fully formed
cccccccfrom the pit of a peach
Charisma in your footsteps
cccccccand your heart so impetuous
cccccccand your eye flits along the fields of differing colors
I stand every day on the New Brunswick train station platform
cccccccwaiting for you
Tapping my foot with a sound like water on stone
You reproduce yourself exactly in each of your children
My throat is too narrow for the hole in my stomach to be filled
Which is why I need you, stepping from the train, clothed
cccccccin the skin of the peach

But you are a bad man
Bumming around in the rice fields
You are the fox in her house dress who sits by the window
cccccccwatching the hens
Your heart is full of peach pulp and fuzz and the fruit
cccccccaround the pit is sour
You are not the monk in his field of persimmon trees
You are not the painter eating his blues
Nor are you the blues or their valuable pigment
You are a man who sprang from the pit of a peach
I loved you while my hair was still buzzed with the #3 clippers
I came to meet you, as far as the platform

You have met so many amazing people on this journey
You have this really special connection with the fox
cccccccand the pheasant
cccccccand the monkey who stands, hand pressed to his silent mouth
I press and hold my hand to my mouth
I am biting the peach pit in half with my sharp fox teeth