Marion called from her office at NYUAD, looking out over a dark campus with a giant new microphone! 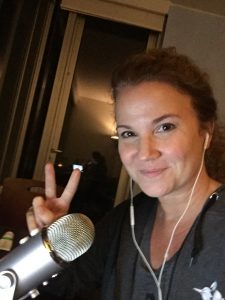 For this episode, we discuss three poems by Michele Wolf: “To Orbit The Earth,” “Expecting Snow,” and “Zebras in a Field.” We were, in fact, early adopters of Michele! She was published way back in Issue 63, just one issue before our first print annual! Check out what she wrote, but because we’re rebuilding our archives, you’ll only find it here (along with access to Issue 63, if you’re up for some digging).

Michele Wolf had a friend in Painted Bride Quarterly early on, when we first published her poems and her chapbook, The Keeper of Light, in 1995. Little did she know then that an Amazon rare-book seller would now offer this special booklet for $75 (!). Note to the world: Michele would be delighted to make one yours for $5.

Fun fact: Michele was raised in Florida, and she loves not only the ocean but also Disney World—almost as much as PBQ editor Kathy Volk Miller does.

On the poetry front, Michele has gone on to publish two full-length collections—Immersion (Hilary Tham Capital Collection, The Word Works) and Conversations During Sleep (Anhinga Prize for Poetry, Anhinga Press). Her work has appeared in Poetry, The Southern Review, The Hudson Review, North American Review and many other literary journals and anthologies, as well as on Poetry Daily and Verse Daily. A contributing editor for Poet Lore, she teaches at The Writer’s Center in Bethesda, Maryland. She lives with her husband and daughter in Gaithersburg, Maryland.

You can read more of Michele’s work on Poets.org; on Poetry Foundation; and on her website.

Listen in on our discussion of Michele’s poems, and check them out below! Our conversations brought up whether or not man landed on the moon (which we could debate, we suppose), deer’s bedtimes (7:00 PM, right?), and poems that make you go “WOWZA!”

Our engineer, Joe, shared a story about finding a paper crane on his windowsill with “as if you could kill time without injuring eternity,” by Henry David Thoreau, but attributed to Ralph Waldo Emerson. He recognized the handwriting, and thinks he might know who left the mysterious missive. Listen in to hear all about this “beautiful world” sort of story, then Kathleen and Joseph have a mini cook-off on air. Tell us what you like to bake! Is baking better than cooking? Let us know your thoughts, and, as always, keep reading!

To Orbit the Earth

Inside the Air and Space Museum’s entrance.

A bounty of white lilies mingled with spider mums,

Dead at ninety-five. In ’62, even a second grader,

Gripped by the grainy blastoff in black and white,

Knew that the compact can was a bleak conveyance,

That that helmeted dad, a human Superman laced up

In a silver suit, could at any moment be lost in flames.

And yet we launch from terra firma, compelled to behold

The blue orb—its panorama of oceans as they curve

From continent to continent. It knocks you down,

This vision, your ache to enfold the globe in your arms.

It is that child who slips into the darkness, sounding

A cry you cannot ease, although you circle round and round.

Against a sky and lake bleached icy gray, the solid

Halt their slow-mo synchrony of steps

At the middle of the lake, its top layer hardened

To host weightlessness, not illusion on elegant legs.

Beauty is no help. The starving deer, weary of feeding

On bark and road salt, resume their lake-top trek.

From spring through fall, the white-tailed locals feast

On roses, carry ticks. One after another, they meet

Your eyes, and yet they leap onto the road—

At the same bend where that drunk teen driver

Bashed the fence, then flipped. Nature

Holds you. When it drifts, it breaks your heart.

Zebras in a Field

The younger woman—hollowed out, reduced

To a shadow wrapped in skin—allowed

The older one, nearly her duplicate,

To enfold her. They had both seen the knife,

A small, glinty blade with a pearlized handle,

When it was set beside the younger woman’s

Thigh. “But you are not dead,” the older woman,

Unable to speak, had wanted to say, “although

It may seem so. You will live an abundant life.

Someday you will drive, after seventeen hours

Aloft, along a paved road edging a clutch

Of tumbledown farms when a herd of zebras

Will race to meet the wooden fence—whinnying,

Of what you know, with the whirl of their stripes.”