How much meaning do you need, Slushies? When language lingers, when images form a spiral, a murmuration, might a poem’s mood hold meaning close to its heart and simultaneously at bay? And, also, how do you pronounce ‘ichor’? All this and more in a rollicking conversation about poet Nick Visconti’s new work, “Burial” and “Unmake These Things.” And speaking of things, listen for Samantha on Anne Carson’s zen koan dollop of insight from Red Doc>: “To live past the end of your myth is a perilous thing.” Or for Kathy and Marion confessing their North Carolina ritual groping of the Dale Earnhardt statue in Kannapolis, NC. And finally: geese. Nick Visconti’s poem triggered a reverie– that time when we accidentally stumbled into the annual Snow Geese migration in Eastern Pennsylvania.

This episode is brought to you by our sponsor Wilbur Records, who kindly introduced us to the artist is A.M.Mills whose song “Spaghetti with Loretta” now opens our show.

Nick Visconti is a writer living with an artist and a cat in Brooklyn. He plays softball on Sundays.

not grief, which inters

in a hill made of clay.

beneath our feet—a container

no boat to speak of.

in water as we pictured

it would be. Instead,

a single shred of light

a pathway none cross,

and up—the cusp of ending,

He isn’t in this yard when

they expect to find him:

The sand before me like water, fluid and holy

under the cratered crown nearly

as I draw the one way I know—stick

figures in a backdrop scenery, thick-

with the sun’s face, bare in the upper

left corner of the page. I’ve made

a habit out of hoarding ornaments,

I choke down every morning and afternoon.

the sky, consuming the bodies

notched, alive in the glow of that always-

for cure among believers and experts

in and on the subject of Zoloft-sponsored

serotonin. A first weaning is possible.

Do not bother with a second. 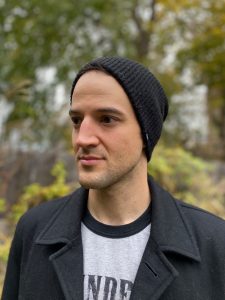