It’s okay to be somber, Slushies! Don’t let the poetic gestures confuse you as the rhythm and pacing contribute to a starburst of flash fiction by Maria McLeod. The obligation to help the writer leaves the crew thinking, as Kathy recalls Dubus’s “A Fathers Story” and Marion thinking of “The Defeated” on Netflix. “The Eternal Fall Backwards” will have you captured in the stream of the writer’s thoughts and deeply invested in remaining there.

What piece of media did you recall while reading “The Eternal Fall Backwards”?

Maria McLeod writes poetry and prose. Honors include the Indiana Review Poetry Prize, the Robert J. DeMott Short Prose Prize, and three Pushcart Prize nominations. She was named the 2020 WaterSedge Poetry Chapbook Contest winner, judged by Oregon State Poet Laureate Kim Stafford, for “Mother Want,” published in 2021. Her second poetry chapbook, “Skin. Hair. Bones.,” will be published by Finishing Line Press in 2022. Her poetry and prose has appeared in leading literary journals such as Puerto Del Sol, The Brooklyn Rail, Critical Quarterly, Crab Orchard Review, Sonora Review and others. Originally from the Detroit area, she currently resides in Bellingham, Washington where she works as a professor of journalism for Western Washington University.

I hold his head in my hands, pull it to my chest. O. O of his mouth. Eyes glazed. It’s dark and he didn’t mean to do it. Make out the words, hit and run, man run over. Wanted to kill him. Words of the mouth: pathetic, half human, why don’t I die, why not dead. Words slide one after another, into each other, slur, collapse, run down, run out.

There are tears and, sorry, I’m so sorry, drinking, always too much drinking. How an evening progresses, regresses. There are his two bodies: one ferocious, to be feared, a man afire; the other, a boy’s, a fetal position, a thumb to his lips. There are nights like this when I am the mother. When I cradle his head in my lap, smooth his hair and say, it’s okay, you’re okay now.

I have gone to the jail tonight to pay them to release him, because, drunk, he tried to kill a man. Drunk and stoned or hallucinating, he had run over a man, but missed his body and only hit his leg and the man fell down in the night and someone thought they heard a deep, deep moan but all were sure they had seen him fall backward in that eternal fall backwards that happens in slow motion. And someone said the man’s body flailed and twitched after the car drove too fast and right at the man who didn’t have time to run but looked up to see the face of a driver already afraid of what he had done.

There are days when I am not the mother. There are days when I am small, when I am the girl, when his hands are too large and his arms too strong. Days when my death comes too soon and then not soon enough, when he drinks too much and finds me in his bathroom seeing myself in his mirror and he’s angry; my face is too much in his house and he cannot stand it there and pushes me quick into the mirror and the mirror cracks and my face is cut. These are the days I am not in my body, and so I walk and walk away and down the street afloat above myself, waiting for him to come. But first, he must hit me so it’s my voice calling us back from the street, my screaming that draws us from the dark, saying look, look what you have done.

Night again. I bathe him and he is crying into the bath. On this night, he has pushed his best friend through a storefront and has cut himself trying to save him, deciding, after the glass shattered, he didn’t mean it. It is like this for him, the before and the after: the anger behind the headlights followed by the fear of the body fallen backwards. Collision of two moments: hit and run. He bleeds into the bath, and I worry that I will need to take him to the doctors and they will see that he has taken drugs and has been drinking. I fear they’ll send him away, or keep him for themselves, thinking I won’t know how to heal him.

I am good at giving the bath. I rub circles at the sides of his head. I know to scoop hands full of warm water over his shoulders so they run down his chest. When I do this, my mother appears in my head, angry and not allowing my brothers to bathe because they make a mess she is sick of cleaning up. Instead she drinks and sleeps on the couch with her own hair greasy and stuck to her head. My brothers would go to school stained, unwashed, and the others would hold their noses and laugh and point. So I would wait until my mother fell into the deep sleep she does not easily wake from and I would gather my two brothers into the bathroom and tell them to take their clothes off. And I would fill the tub with water and the oldest one would refuse to take off his underwear because he didn’t want me to see him. And I would say to get in anyway and I won’t look at you. And this time he would do what I said.

I know his sickness. I know that what is left looks like him, but is not him. When I bathe him, he stops my hand from scooping the water and pulls me to him. He sees that I have been crying, too. He says that he did this. And I say yes, but that moment is past and now we are in another. He is crying the tears that come after the screaming and the hitting, tears that ask forgive me. I am closing my eyes and whispering that I have a room where a bed waits for him, where the walls give way and the light is a soft, cloudy white. I am circling him with my arms and he is crying into my belly. I am taking him, guiding him down the cold hallway into the warmth of the room where I cover him and keep watch, waiting for what is yet to come. 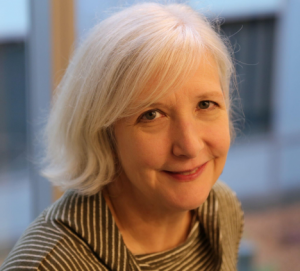