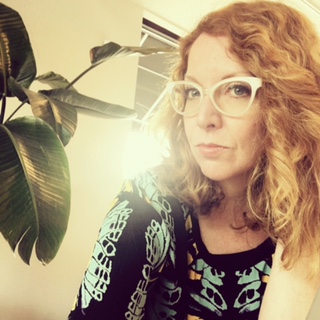 But now, more about the poet: Erin Adair-Hodges grew up in a small town in New Mexico where there were no trees for treehouses so instead kids dug holes and sat in them for fun. She quit writing poetry for a long time after some people said her stuff was not so good. Since sending out her work for the first time in 2014, she’s been awarded The Georgia Review’s Loraine Williams prize and a Bread Loaf-Rona Jaffe scholarship; her first book, Let’s All Die Happy, won the Agnes Lynch Starrett prize and will be published in October 2017 as part of the Pitt Poetry Series. The moral of the story is some people don’t know what they’re talking about.

“In Barstow” was a great read with brazen imagery, and we loved discussing it.  Next, Kathleen read “The Last Judgment” for us, and really enjoyed the delicious words of the poem. Listen in to hear our discussions about Erin’s poetry.

Jason revealed to us that while he was reading up on Erin, he found out that she won his favorite poetry prize, the Agnes Lynch Starrett prize for her first poetry book, published by University of Pittsburgh Press.

After discussing Erin’s work, we talked about Marion’s experience in the Dead Sea, and the pros and cons of technology in the modern day when it comes to meaningful experiences (naturally!). Kathleen asked Marion if she felt different after floating in the Dead Sea, and she was excited to tell us that yes, she was! Then she was disconnected before she could tell us why and we could only hope it wasn’t Divine Intervention. Listen in to catch the start of the story, and tune in next time to see if Marion was raptured or if the evil of technology got her instead.

Important question: Are cats capable of being just as loving as dogs can be, or are they killing machines? Tweet us @PaintedBrideQ with the #PBQSlushPile and give us your thoughts!

I was in-between emotions,

the night a tube sock

It was the hinge of my life

maybe, how do I know

until the end what the middle was

and why not that night in Barstow

the butt crack of California

in a Super 8 alone reading a book

the Bible—Even the tiniest bolt

must be screwed on tightly

in order to perform its best

it said and I needed comfort but all

I got was stuck on screwed

which is what I wanted but also how

I felt that summer I did not move

to Portland again, the summer

the hyssop and sage with its homely

greed and who can blame crab grass

for seeing something beautiful

then stepping on its throat.

There are so many tiny murders.

It’s why handjobs were invented

and I am a scientist inventing

new ways to be lonely.

I get bonuses every year.

That year, July was pressing

its mean heat to the door, listening

for a heartbeat inside and I thought

how wonderful to be wanted

through all the meat straight

to the marrow and July said yes

July said whatever it is you are thinking

I am thinking too so I tore off my clothes

to get closer, the book of aphorisms yelling

If we can reduce our desires there is nothing

really worth getting upset about but I don’t like

being told what to do and out of spite

started wanting everything I saw—

The room shrugged. The shag carpet

yawned and swallowed my name.

I come to you in all seriousness, reverent

as a turtleneck—I am graceless but I am not depraved.

and was trying to find Him, following clues

with my comically oversized magnifying glass held up

to my giant eye, lashes collapsing like jaws, grilling congregants

under the naked lightbulb of my longing. I kept just

missing him. He went thataway. Maybe I wanted to be Jewish

to be done with Jesus but not yet break up

with God, as if moving into the guest room but leaving

my clothes in the other closet, that version of myself

a hallway away. I am the ghost of the house I live in—

old me-phantoms surround, fuck around with the furniture,

make all the mirrors tell the truth. One night I have a dream

my husband leaves and the nightmare part is that I’m

relieved and so I finally see who I am. It’s not

that I got used to loneliness, only that it was too late

to learn anything else. The first time a man touched me

it was to lower me into the water and raise me out,

new fish, the sin picked clean. I was saved, as if I could be

spent—saved, I saved myself for God, or if not God

then a man God sent, posing us toward each other

in a desert diorama, His Holy Homework,

but the first two boys I loved are dead, so at night

I give myself to them, unzip the hollows, usher them into

the pitch. The books inside me are blank. I birth the boys

as my son, whom I love and whom I try to forgive.